Be volunteer in Belgium

Belgium is a small, highly developed and densely populated country (10 million of inhabitants) at the cross-roads of Western Europe. Belgium is one of the founding members of the European Community, and its capital, Brussels, is also the capital of the European Union. It is a federal state, with 3 relatively autonomous regions: Flanders in the north, where the language is Dutch (“Flemish”), Wallonia in the south, where the language is French, and the centrally located Brussels, which is officially bilingual. Belgium’s rich history has left impressive churches, town halls, castles and works of art, dating back to the early Middle Ages, spread around the cities and country-side.

Belgium has possibly the highest “quality of life” in the world, as testified by its excellent food, housing, health care, education and infrastructure, its world records for high productivity and low poverty, and the appreciation of foreigners residing in Belgium. 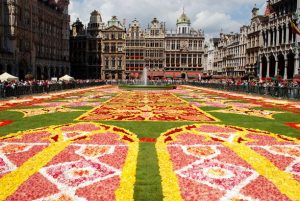 Food in Daily Life. Bread and potatoes are the traditional staple foods. Most meals include pork, chicken, or beef, and seafood is popular in the northern part of the country. Beer is the traditional drink, but wine is imported in large quantities. In northern cities, popular dishes include mussels with fries and waterzooia (literally boiling water), a stew made of vegetables and meat or fish. All accross the country, French fries are eaten with steaks or minced raw meat. Cooking is traditionally done with butter rather than oil; there is also a high consumption of dairy products. Moreover, immigration has ensured a diversity of “ethnic” restaurants and is gradually changing the eating habits of the residents in culturally mixed areas.

Food Customs at Ceremonial Occasions. Christmas is an occasion for large family meals with grandparents and cousins. There are many other occasions for long meals at public and private celebrations, such as weddings, funerals, and the days devoted to city and parish saints. Pastries are associated with religious and civil occasions. At Christmas, people eat sweet bread in the form of the child Jesus; at Easter, children are told that eggs are dropped in the gardens by flying churchbells; and sugar beans are distributed to those who visit a young mother.

Classes and Castes. There is a relatively even distribution of wealth, with 5 to 6 percent living close to the poverty line. The majority of the population is middle class. The vast majority has equal opportunities for education and a professional life. There is a very inclusive social security system.

Deep societal cleavages have led to the construction of “pillars,” integrated social structures based on ideology. Although “pillarisation” is becoming less important in social life, its influence is clearly noticeable. These pillars encompass every aspect of societal life, including youth, sports and leisure movements, education at all levels, trade unions, health funds, newspapers, and political parties. The three main pillars are the Christian-democrat pillar, the socialist pillar, and the liberal pillar. Until the 1990s, the positions of these pillars were mutually agreed on and anchored through a complex system of “political nominations” in which people with a philosophical affiliation to one of the pillars were appointed to key societal positions as magistrates, top public officials, and leaders of state-controlled companies. The public is turning against this aspect of the pillars, but their influence and power are considerable, especially when their interests are challenged.

The major cleavages are ethnocultural (Flemish speakers versus Francophones), philosophical (the church versus liberals) and economic. The importance of these cleavages has changed over time, often leading to the establishment of new coalitions.

Symbols of Social Stratification. Wealth is most often expressed through houses and cars. In general, there are few external behavioral class markers. The upper classes act discreetly, and people make little distinction between classes or social strata. Exceptions sometimes appear in youth culture, where fashion can turn into a means of social distinction.

Cost of living in Belgium is 5.59% higher than in United States (aggregate data for all cities, rent is not taken into account)

You might want to note that most stores in Belgium close around 6pm (8pm for supermarkets) and that lots of stores are closed on Sunday.

How to get there?