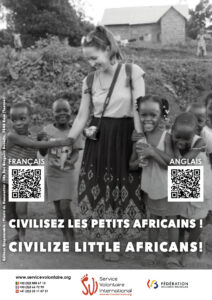 Photo by Adam Ján Figel : "The photo was taken in 2017 in Uganda where I and the girl in the photo were volunteering at a children's HIV/AIDS clinic." 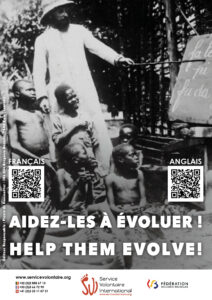 Western nations have always maintained a very particular relationship with Africa. Frequently considered as poor and needy, the cradle of humanity attracts people from northern countries who feel invested with an important mission and responsible for the salvation of the local African populations. Thus, many are those who go and commit themselves to help the people who need it most. Naturally, commitment is a value that we stand for. It is essential that as many people as possible become aware of the real challenges faced by crisis-stricken African countries and of the necessity to establish a collective effort to improve the life of these populations.

But help is a much more complex concept than it looks. Do we always act for the good of the people we sincerely believe we are helping? What are the long-term consequences? Could it be possible, not out of malevolence, but out of ignorance, to do good badly?

Take a closer look at the man in white on the picture on the left. He is a member of the Society of the Missionaries of Africa, an organisation founded in 1868 by Archbishop of Algiers Cardinal Charles Lavigerie in order to educate and catechise the local children and build Christian villages on the Algerian territory. As soon as the Society was created, its members were incited to adopt the country’s customs and lifestyle, and thus were encouraged to wear the traditional local white robe from which their definitive name derived: the White Fathers. They expanded very quickly through multiple countries across the African continent (Sudan, Tunisia, Congo…) and broadened their field of activities (baptisms, health care, education…). Everywhere they went, they “spread the good word”, taught the children, brought their medicine.

So, what is the problem? The problem is that all the actions carried out by these good-hearted missionaries have always been in line with a clear purpose: evangelise Africa, supporting at the same time the idea of European culture (or, in our case, the Catholic religion) being superior to all other cultures and deserving to be spread across the world. This postulate places African and European people in an absolutely unequal interaction system in which Blacks necessarily depend on Whites to develop and thrive. Therefore, this is not a horizontal exchange between two peoples, but an unbalanced power relationship in which the dominant imposes its culture to the dominated. And again, this didn’t always result from meanness. In fact, the Catholic Church and the White Fathers had probably in mind the real ambition to “save” the people of Africa. But for them, it required their evangelisation and their assimilation to European culture.

This system was so embedded in the collective imagination of the colonial era that a term was developed to refer to the Congolese people who had adopted the lifestyle of the Belgian colonists: Évolué (French for “evolved”). Charming, isn’t it? Could be considered as “evolved” those who were Christian, had followed a long enough school curriculum and, most importantly, could speak French. In a nutshell, only those who accepted to abandon their native culture to blend into that of the colonists were “evolved”. But the prerequisites to be allowed into this caste went even further: some obligations were very hard to meet, like having a home equipped with gas, which was financially impossible for most of the locals. The colonists even intruded into the Congolese people’s privacy by examining their houses to make sure they had enough furniture and dishes. Their homes had to be maintained in order based on European standards. In short: they had to do everything “like Whites”. Even some Congolese people ended up accepting this term and everything it entailed, as clubs and associations for “evolved people” were founded during the 1940’s. These groups gave their members more privileges and opportunities of social ascension than their non-evolved compatriots had.

We had already mentioned it in a previous article (link), but this domination-submission relationship continues today, reinforced by voluntourism agencies which offer young volunteers the opportunity to take part in so-called “humanitarian” missions. The people who participate in projects of that kind (like the young lady on the picture on the right) can pay the organising company up to several thousand euros to go spend a few days in a crisis-stricken country where they will get to play doctor, professor, or any other job that requires specialized skills they do not have. That way, they overshadow true (often local) professionals who could act much more effectively.

What do you think of all this? Do you consider that, despite everything, these “white knights” do more good than harm to the local people? Is it possible to contribute to the development of communities who need it without dispossessing them of their identity and autonomy? How to establish a more equal interaction system between the different nations of the world?

Let’s evolve all together!