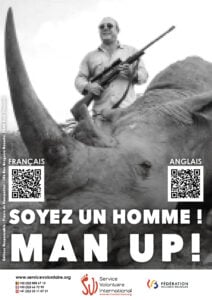 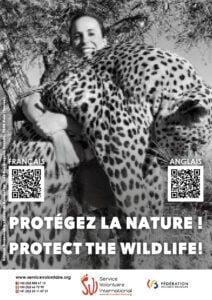 How handsome. How strong. After having proudly fought in a fierce battle between Man and Animal, their ardour and panache finally led them to victory.

The one they had been stalking for hours under the burning savannah sun. The one for which they invested several thousand euros. They will now get to go home and hang on their wall its head, horns, skin, or any part of its corpse that they will find aesthetically pleasing. Finally we have some real men. Winners!

It should come as no surprise to anyone if we state that trophy hunting is a slightly controversial activity. Yet it is still widely practised in many countries. Let’s take a look at what this particular hobby is all about and what it can bring (for good or ill) to local people and the animal world.

The principle is as follows: hunters (usually from the West) go to Africa and pay large amounts of money for the right to kill an ‘exotic’ animal and bring its carcass home. The sums can range from a few hundred euros for a baboon to almost 40,000 euros for a lion or an elephant. We are looking here at the particular case of Africa, as we think it is most revealing, but game tourism is present on all continents (e.g. bear hunting in Canada, etc.). The most popular animals are those of the Big Five: the African lion (Panthera leo), the African bush elephant (Loxodonta africana), the African buffalo (Syncerus caffer), the black rhinoceros (Diceros bicornis), and the African leopard (Panthera pardus). All of these, except the buffalo, are endangered species.

But according to the defenders of trophy hunts, this practice would actually be beneficial for these same animals. Indeed, according to them, the money paid by hunters to kill an animal would be used to finance campaigns to preserve and reintegrate endangered species. At the same time, this money would also be injected into the country’s economy and would be of great benefit to the local population, who often live below the poverty line.

Difficult to sort the truth out. Indeed, the reality is not that simple: numerous study reports attest that this sector is particularly corrupt and the share that is actually paid back to local communities and to animal preservation actions is minimal. In Cameroon, for example, the share passed on to local people amounts to only 3% of the total generated by this sector. In Zambia, local communities do not own the hunting land and therefore also receive only a very small percentage of the income. A report by the Humane Society International indicates that in Botswana, Ethiopia, Mozambique, Namibia, South Africa, Tanzania, Zambia and Zimbabwe, for example, game tourism contributes very little to the domestic economies of these countries. Regular tourism is estimated to provide 132 times more employment than trophy hunting.

As for the benefits of hunting on the preservation of endangered species, it also seems careful to doubt this. Many remember Cecil, a Zimbabwean lion shot by an American dentist in 2015. This animal was monitored by a team of researchers from the Wildlife Conservation Research Unit at Oxford University. However, it is important to specify that the hunter in question was a poacher. One of the main arguments put forward by the defenders of game tourism is that legal hunting finances the struggle against poaching.

Very good then. Let’s talk about poaching. Certainly there is a huge gap, ecologically and economically, between trophy hunting and poaching. Indeed, one can fairly admit that legal hunting can be viewed as a less risky alternative for poachers, that therefore encourages them to hunt in a more “reasoned” and law-abiding manner. But several animal associations refute this argument by claiming that the legalisation (and thus trivialisation) of trophy hunting increases the demand for ivory, horns and “bushmeat”, leading, paradoxically, to an increase in poaching and trafficking (estimated at $20 billion per year). However, this increase seems to have peaked in 2011, after which the trend stabilised and slightly regressed.

Also, let’s not forget that the most hunted animals are usually the biggest and the fittest. Those with the best genes are therefore the most killed. Which is the opposite of what natural selection normally does. Thus, we see that the average weight of African bighorn sheep has decreased from 85 to 65 kg between 1975 and 2005, and the size of their horns has decreased from 70 to 50 cm. Not to mention that more and more female elephants no longer have tusks.

In a nutshell, all of these arguments don’t provide a clear and definitive answer to this difficult issue. What do you think is the best solution to stop the killing and extinction of endangered species? Do you think that hunting tourism is a blessing or a scourge for endangered animals?

We are Service Volontaire International. Through volunteering, we aim at encouraging people to adopt a new critical outlook on the world around them. As a Youth Organisation recognised by the Belgian Fédération Wallonie-Bruxelles, our mission is to help the younger generation to become responsible, active, critical and united citizens.