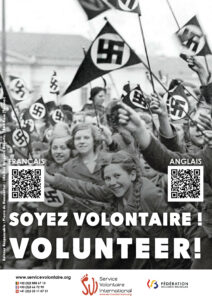 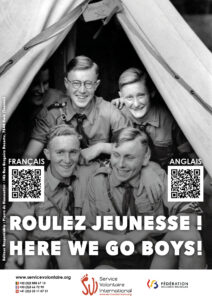 In the 1920s, Germany was still suffering the aftermath of its World War I defeat. Overwhelmed by a major economic and political crisis, it felt oppressed by the Treaty of Versailles, which was viewed by German people as a Diktat imposed by the victors. Inflation, unemployment and poverty made daily life in Germany more than difficult. Young people suffered greatly from this life of deprivation. Many of them spent their summers working for their parents and could not afford to have any distractions in this austere environment.

This partly explained the growing popularity of youth movements. These were already deeply rooted in German culture long before that, but they grew in number during this period: Communist Youth, Catholic Youth, Bündische Jugend… All of them were inspired by the British scouting movement. Experiencing playful activities, life away from parents, independence, and the adventurous atmosphere of these summer camps was very appealing to young people. Among these different groups was of course the Hitlerjugend (HJ), or in English, the Hitler Youth.

The organisation was founded by Adolf Hitler in 1922, was banned the following year at the same time as the Nazi party, and was then reconstituted in 1926 by its definitive name. From this point onwards, its popularity soared. From barely 5,000 members in 1926, it grew to 25,000 in 1930, reaching the astronomical number of 2.25 million young people in 1933, that is, the year Nazism came to power.

There are many reasons for this growing popularity. First of all, as mentioned above, young people who joined the HJ had access to entertaining activities that made them forget their problems and their difficult life with their parents. The uniform erased social differences and gave them a strong sense of belonging to a group in which they all seemed equal. But beyond that, HJ leaders, and especially Hitler himself, made it a point of honour to flatter the youth. They made children and teenagers feel that they had a real role to play in the future of their nation, that they could become heroes, thanks to National Socialism. In this way, young people had access to everything they dreamt of from the adult world: military training, fighting, camouflage, shooting training. Young children played war in the hope that, one day, they would play for real.

In 1933, Hitler had all the other youth movements disbanded and pushed them (willingly or unwillingly) to merge with the HJ. The organisation then obtained the monopoly of summer camps. In 1936, the number of members exceeded five million. In 1939, being part of the Hitler Youth became compulsory. All the conditions were thus met for perfect indoctrination. Far away from the parents, the children not only received military training, but also an ideological education that emphasised racial theories. German people were presented as superhumans with superior physical and intellectual qualities. At the bottom of the ethnic scale were said to be the Jews and the Bolsheviks. All these values were also integrated into the school curriculum.

But the children of the HJ did not realise this brainwashing. They drank the words of their camp leaders and especially of the Führer, whom they worshipped like a pop star. They no longer thought for themselves. They were paraded through cities. They were the showcase of the regime. They felt proud: proud to be German, proud to be Aryan.

And yet, not all of them were happy. In this environment where excellence and performance were the only values that counted, the weak were laughed at, humiliated, harassed, beaten. Suicides were numerous.

In 1939, when war broke out, those who were old enough to fight joined the Wehrmacht. The youngest idolised their elders in battle. Propaganda brought them nothing but flattering images of the heroism of the brave fighters. They dreamt of going to war like them, because they viewed the German army as invincible.

But by late 1942, the Third Reich began to lose its advantage. Due to a lack of workers, the young people of the HJ were mobilised on the so-called “Home Front”. Teenagers from age 14 had to take on various jobs: collecting resources from the inhabitants, harvesting, working in factories, in the mines… The regime sang their praises, but in reality these young people suffered and began to doubt, because their working conditions were extremely harsh. This was the beginning of disillusionment.

In 1943, Germany suffered a great defeat against the Russian army. Propaganda played it down, leading some people to turn to foreign radio stations for accurate information. As this was strictly forbidden by the regime, some young people did not hesitate to denounce their own parents.

In the bombed cities, adolescents were mobilised to dislodge corpses from the rubble and witnessed scenes of horror. But this was only the beginning. Little by little, young budding soldiers were removed from their summer camps and placed on real battlefields. Some of them were only sixteen years old when they shot down their first planes with cannons.

Unfortunately for them, the heroic and victorious war myth was soon overtaken by reality. The Allies gradually gained ground and the German army weakened, so much so that in April 1945, ten-year-old children were sent to the battlefields, all determined to give their lives for the Führer. Many of them did.

After the Allies’ victory, the organisation was definitively dissolved and its members underwent a major denazification campaign. Young people were presented with images of concentration camps, of horrors caused by the ideology of the Third Reich, of everything that Nazi propaganda had concealed.

So, what about today? What do you think are the dangers facing today’s youth? What are the benefits and harms of today’s youth movements? What means do we have to prevent the indoctrination of young people by different political groups and to ensure that their critical spirit is safeguarded?

We are Service Volontaire International. Through volunteering, we strive to ensure that young people’s ability to think for themselves is never violated again and that such events never happen again. At a time when right-wing extremist ideology is regaining popularity, we feel that it is the duty of us all to make young people aware of the dangers of such a mentality. As a Youth Organisation recognised by the Belgian Fédération Wallonie-Bruxelles, our mission is to help the younger generation to become responsible, active, critical and united citizens.