After the Swedish young woman gave a  speech at the Assemblée Nationale in Paris last Tuesday, the SVI team wished to put Greta and her extraordinary destiny under the spotlights.

Greta’s destiny is the story of a young woman born in Stockholm sixteen years ago. Greta has the angel face of a child and yet, she surely lost her innocence a long time ago since Greta is aware of global warming since the age of eight. Convinced of the utter importance of her struggle, last August, she decided to drop out of school once a week to sit in front of the Swedish parliament holding a board with the inscription “Strike for climate”. Although she was alone in the beginning, her schoolmates soon joined her. As time went by, youngsters from all over the world have stood behind her and her appeal for mobilization. From Brussels to Paris, Madrid or Toulouse, seventy thousand pupils from two hundred and – according to the Guardian- seventy cities have heard her cry of anger and taken part to the now famous Fridays for future.

“We have to change”, Greta keeps saying after reading the alarming conclusions of the IPCC (International Panel of Experts on Climate) and those of the Paris Agreement. In a TED show, she warns us: “What we do or don’t do right now, me and my generation can’t undo in the future”. Her message is clear. We must make a change NOW for our children and us.

THE LEADER OF A WHOLE GENERATION

“No more words, it’s time to take actions! Greta repeats everywhere she goes. From the streets of Stockholm to the tribunes of Katowice in Poland, there are only a few kilometres, which, of course, Greta travels by train because she cares about her carbon footprint. There, in Katowice, Poland, the young woman gave a speech last week. The audience received her punchlines during the UN Conference. (COP 24). While Greta looks at her audience with determination, she questions the mighty men of our world on their refusal to face reality as it is and on the world which they are going to leave to their children if they don’t take actions now. On the day she pronounced it, Greta’s speech was shared on the whole world’s social networks and twitted by Bernie Sanders, the ex-candidate to the American presidential elections. Even before she could notice it, three million people had seen Greta’s speech.

Since this day, Greta is caught in a whirlwind. Every single media wish they could meet the Swedish young woman. She is either invited to the UN conference or she makes the cover of the Time magazine which considers Greta among the 1OO most influent personalities of 2019.This is how Greta has become unescapable… for better or worst.

YOU ARE NEVER TOO SMALL TO MAKE A DIFFERENCE

Yes, Greta receives awards and encouragements for her struggle. The latest evidence of this date back to last week when she received the Prix de la liberté (Freedom prize) in Caen, Normandy, to acknowledge her commitment at a young age since this award celebrates any commitment taken by young people between 12 and 25 years old in favour of freedom. Her opponents feel free as well when it comes to talk about her as the Tinker Bell of the climate and to denounce what many parliamentarians see as a vain struggle. “You don’t have to listen to us, Greta replies to critics.” After all, we are only children. But if you choose not to listen to us, at least, listen to scientists!”

When facing an emergency as big as climate change, we, at the SVI, stand behind Greta and give meaning to the Belgian motto “Unity makes strength”. When it comes to commitment, be it Greta’s or someone else’s one, is the strength of our convictions. So, YES, we definitely should keep blowing the whistle about global warming and taking actions towards a better world. In conclusion, let’s quote Tinker Bell, no matter what Greta’s opponents think about the reference: The only way to make life become a fairy tale is to believe in it. 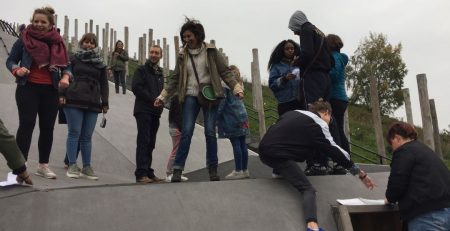 The Return weekends of the SVI

Reserve the dates in your datebook ! The annual RETURN 2019 weekends of the Service Volontaire International are fixed... read more